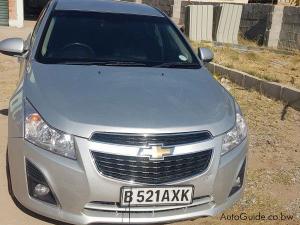 Chevrolet Motor Division is a leading group of companies «General Motors», specializing on the production of passenger cars, pickup trucks and SUVs. The company «Chevrolet Motor Cars» was established in 1911 by the founder of «General Motors» William Durant who invited into the new company popular racer Louis Chevrolet, who gave the new company his famous sonorous name. The first Chevrolet Classic-Six was born on October 3, 1911. It was a traditional American four-seater with a 6-cylinder engine producing 30 horsepower. But the price of the car was very high and did not have the proper success. Therefore, William Durant started producing low-cost 4-cylinder cars - open cars Baby Grand and sport Royal Mail. Exactly on these models, first appeared in 1914, the famous logo «Chevrolet» - bow tie. In 1916, at their base was created Chevrolet-490 which brought company great fame. These cheap but reliable cars became the same popular as the "Ford". Toward the beginning of 30’s Chevrolet becomes the most popular brand of cars in the U.S. By that time the number of vehicles sold is calculated already by millions. 1963 year became one of the most significant in the history of Chevrolet - appeared sports model Corvette. In 1969 he was released wheel drive SUV Chevrolet Blazer K, constructed on the chassis of a full-size pickup truck and a new model called Monte Carlo. In the early 70's was released the first minicar - model Vega. The company sold over 3 million cars and set a new annual record. At the same time, the company introduced the first model of the small size of a pickup truck - "light commercial vehicle". Was sold ten millionth car of Impala. Impala car brand became the most popular and buy "full-size" cars of America. In 1974, Chevrolet began producing model Monza. At the present stage of development, the company of Chevrolet actively produces models of compact cars. Thus the globe is represented compact Chevrolet Cruze (with a 1.4 liter engine with 120-140 hp). Since 2011 General Motors decided to equip their cars infotainment system MyLink, which allows you to switch radio stations, to operate external devices and also search contacts in the phone list using voice commands. This system is an addition to program of satellite navigation and communication OnStar, installed on all cars GM. For the first time MyLink appeared on the Equinox SUV and Volt hybrid sedan 2012 model series. The products of Chevrolet are manufactured in factories in the U.S., Canada, Brazil, Mexico and Argentina.